About the Olympia Theater

It's 2020 – The Fun is Just Beginning!
Please help us promote and preserve the Olympia Theater for generations to come.

The Olympia Theater opened in 1926  . . . but the fun is just beginning!
Almost nine years ago, the City of Miami faced severe financial crisis and the possibility of being forced to board up the historic Olympia Theater.  In 2010, Olympia Center, Inc. was created to keep the doors open and bring quality programming to the historic theater in Downtown Miami.

We can't do it without you!
Check out the Photo Gallery:  Historic Olympia Theater in Downtown Miami

Tucked into Miami’s contemporary skyline is an enchanting Mediterranean courtyard with shimmering stars and golden balconies. Majestic turrets and towers suggest another era when performances were events, and grand theaters provided a dreamlike escape from the modern world.

The Olympia Theater is not just a “venue” – it is the jewel of South Florida arts and entertainment facilities, affording South Florida’s diverse community and its international guests a unique cultural experience that defies comparison.

The Olympia Theater opened in 1926 as a silent movie palace and amazed the public with its stunning Moorish architecture, perfect acoustics and simulated night sky, complete with wafting clouds and twinkling stars. It also achieved fame as the first air-conditioned building in the South.

The “talkies” and Vaudeville soon arrived at the Olympia, and for more than 40 years the theater was the number one entertainment center in Miami. It was one of the last theaters in the country to showcase Vaudeville acts.

Throughout its history, the Olympia has been host to the world’s most exciting performers in the arts and entertainment community. Cultural icons such as Elvis Presley, B.B. King, Luciano Pavarotti and Etta James have provided memorable evenings under the Olympia Theater's stars. The theater has also hosted today’s best-known pop stars and is a favored venue for concerts.

In 1975, South Florida business tycoon and philanthropist Maurice Gusman saved the aging theater and adjacent Olympia Office Building from demolition then donated them to the City of Miami in 1975. Thanks to extensive restorations in the 1970s, overseen in part by famed architect Morris Lapidus, the theater was named to the National Register of Historic Places in 1984.

Time continued to take its toll on the Olympia, however, and by the late 1980s virtually every structural system of the theater was in need of repair and replacement. The roof had several leaks that had damaged the theater’s historic paint and plaster as well as the seating and carpeting in the auditorium. The HVAC system had to be entirely replaced. Electrical, sound systems, and plumbing all required upgrades.

Noted restoration architect Richard J. Heisenbottle, AIA, was retained to develop an ambitious, multi-year plan for additional stabilization and restoration work. In order to minimize loss of income for the theater, construction was planned to occur during only the summer months, when bookings were normally at a minimum. Critical components were broken down into construction segments that could be completed in three months. During the rest of each year, the architectural and engineering team completed plans and theater management secured funds for the next round of work.

While the structural repairs were underway additional projects were launched to make the theater more attractive to promoters. The stage was enlarged and new lighting and audio equipment were installed. The theater’s already sublime acoustic properties were left intact.

The theater owes its distinctive character to architect John Eberson, the master of “atmospheric” theater design, and it is one of the few Eberson theaters around the world still standing. Restoration of Eberson’s original design scheme, including original colors and finishes, was another top priority of the construction plan. Following detailed analysis, decorative painters restored the original, vibrant paint scheme to the decorative plasterwork throughout the theater. Seventies-vintage plastic seating was replaced with wood-and-brass seats boasting historically appropriate detailing. Even the new carpeting was custom-loomed to match the 1926 original.

Today, as the restoration work continues, Miami’s most beloved cultural venue has retained its stature in a Downtown that continues its own transformation. High-rise office buildings and glittering luxury condominiums have replaced many of the theater’s aging neighbors. Downtown Miami is once again becoming a place to live, work, shop and play, and the Olympia Theater is at the heart of the action – just as it was in 1926. 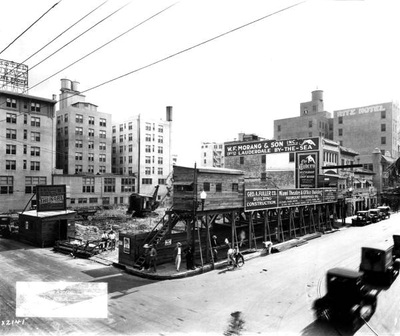 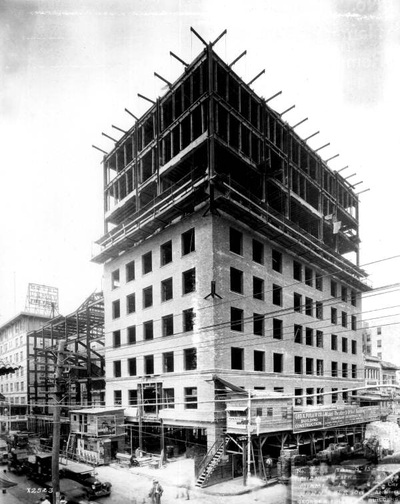 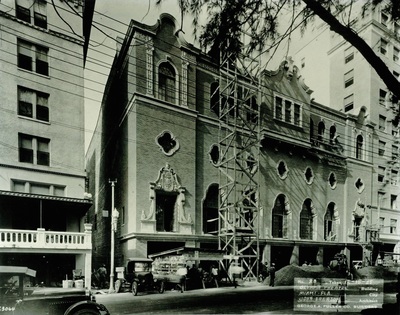 The Mediterranean Revival facade along 2nd Avenue rises. This component of the building houses the theater. 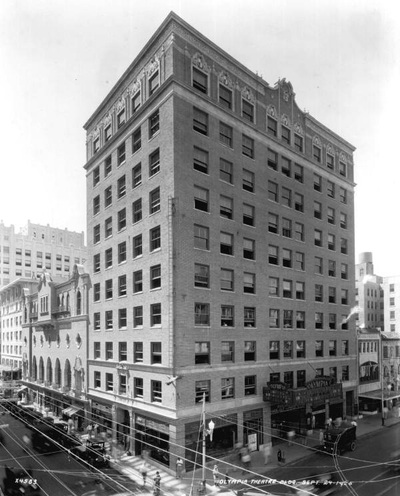 The Olympia Theater opens in February 1926. 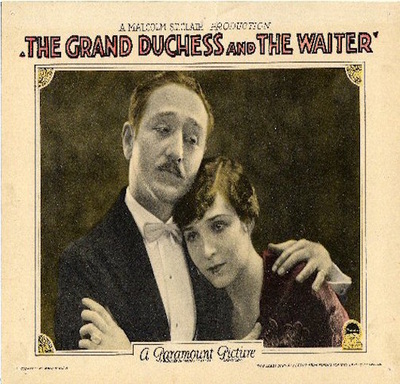 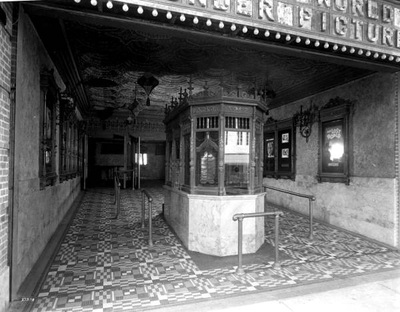 The original ticket booth - now on the sidewalk in front of the theater - was located within the open entrance. 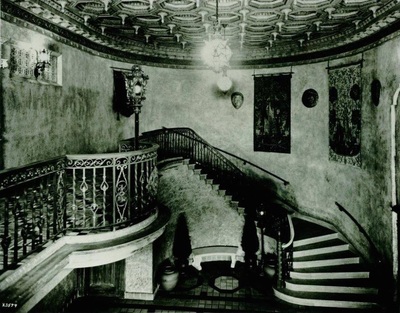 The interior lobby of the Olympia. 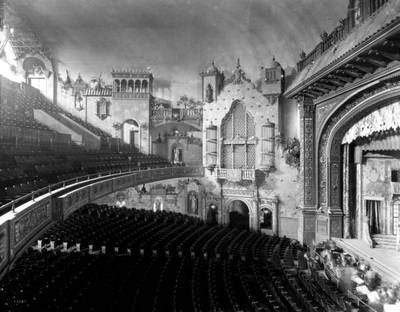 The theater's interior has been fully restored - and today it's in color! 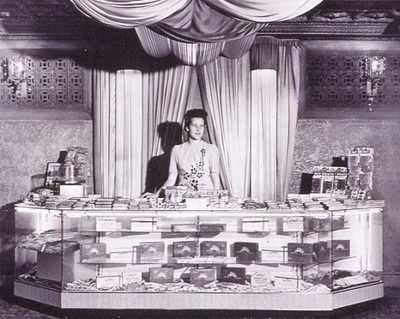 Concessions anyone? Don't try to order a cocktail – it's prohibition! 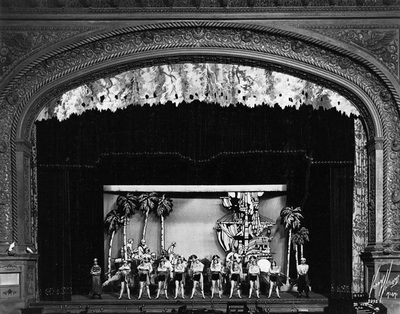 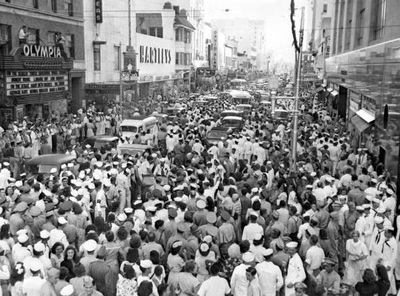 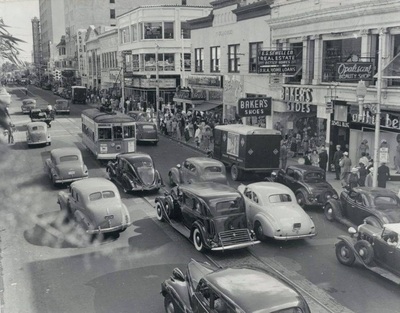 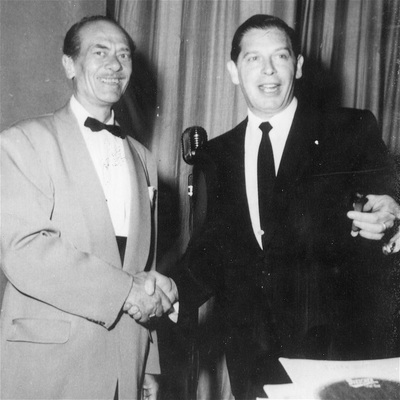 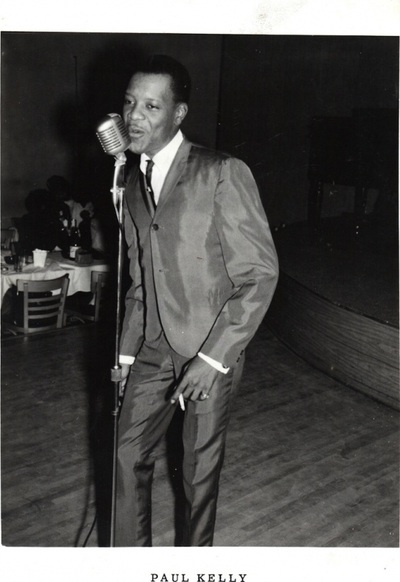 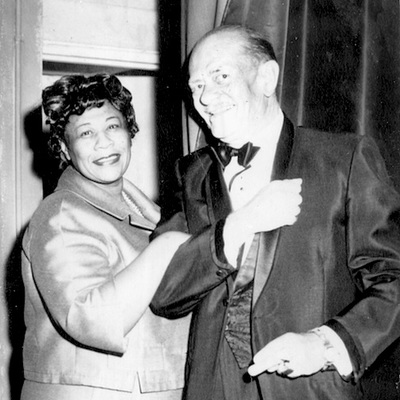 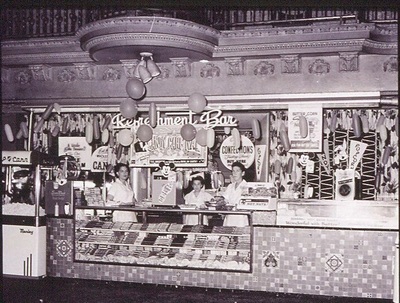 1950s Concession Stand - but you still can't get a cocktail. 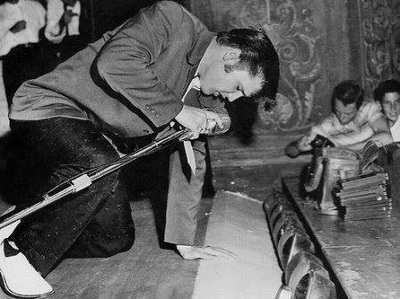 Elvis Presley on the Olympia Stage – 1956 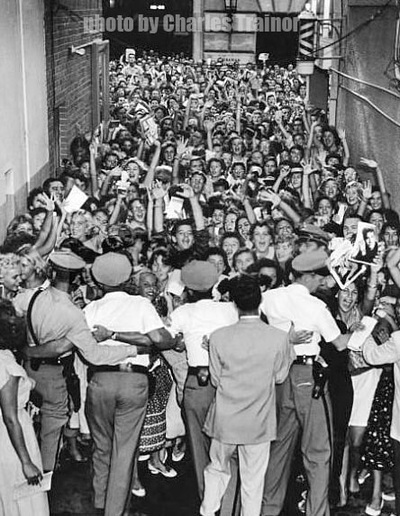 . . . and the crowd of girls in the alley outside the stage door – hoping to catch a glimpse of Elvis.

The second floor lobby was remodeled in the 1970s. 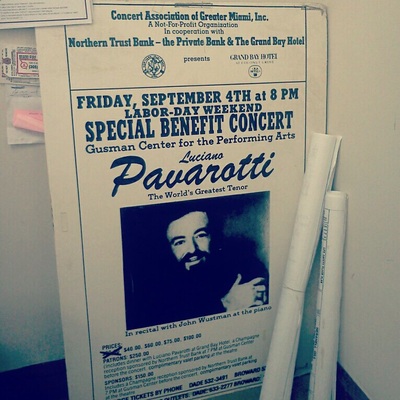 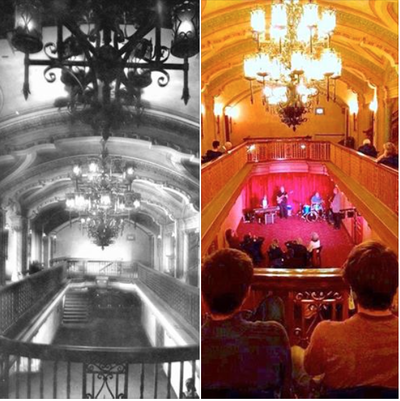 Then & Now – events in the Olympia's "Lobby Lounge". Cocktails available at the bar. 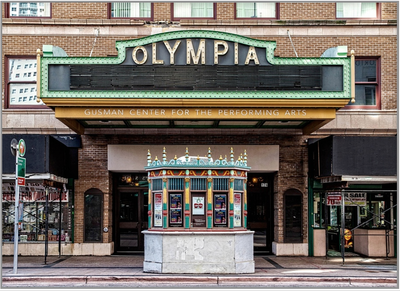 The Olympia Theater in Downtown Miami – 90 years young, and the fun is just beginning! 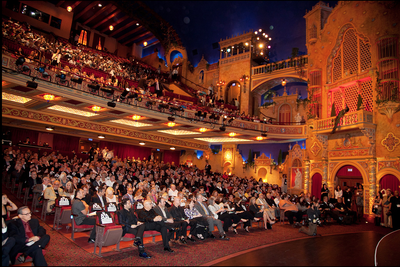 Fully restored interior of the Olympia Theater hosts cultural events throughout the year. 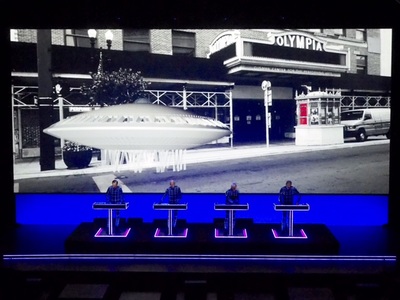