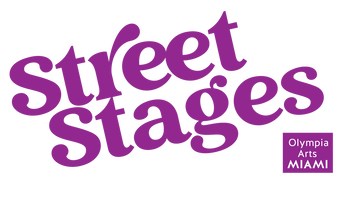 We're Back on the Street!

In January 2023, Olympia Arts MIAMI continues to "take art to the streets" with a new series of Street Stages through March 2023.

SAT • FEB  04 • 4:30p + 6:30p
@ 100 NE 1 AVE. (Old Post Office)
Jimi Dred • Acoustic Guitar/Reggae
​Jimi Dred, singer, musician, songwriter is most noted as the Band Leader, Singer/Keyboardist for the legendary Miami reggae band Inna Sense, which was nominated for a Most Promising Artist
Reggae Grammy. He has performed for the Royal Family of Monaco during a South of France tour backing up Julian Lennon for Salt Water shows to raise awareness and help save the Australian Rain Forest. Jimi is widely recognized as one of the pioneers of the American Reggae scene by reggae legends such as Cat Core from Third World and others.

THU • FEB  09 • 4:30p + 6:30p
@ 100 NE 1 AVE. (Old Post Office)
The Harden Project • R&B/Jazz Duo​
The spirit of music brought them together and the spirit of love binds them together. The core of The Harden Project consists of Singer/Composer/Author Ja'Nia Harden and Musician/Composer/Arranger John Harden. These two artists skillfully and fearlessly play off of each other and display fluent chemistry during their performances. The couple blends their influences and life experiences to create soulful groovy sometimes enchanting compositions. They are not afraid of being transparent and open while performing.The Harden Project features fusion based music of all genres, heavily influenced by jazz, social music, and soul.

SAT • FEB  11 • 4:30p + 6:30p
@ 100 NE 1 AVE. (Old Post Office)
Franchesca Romero & Melinda Rose • Jazz
A native of Miami, Franchesca “Frenchy” Romero began her piano studies in the classical realm until she entered high school where she began her jazz studies. Franchesca has performed both nationally and internationally, developing a unique sound which embodies the rich tradition of both genres. Melinda Rose Rodriguez is a Miami-born singer songwriter who has already made a name for herself in the jazz world. She has traveled to perform alongside Michael Feinstein, Cyrille Aimee, Jane Monheit and worked frequently with jazz greats such as Kevin Mahogany. Franchesca and Melinda have been playing together for many years and are working on a debut album project.
​

SAT • FEB  11 • 5:30p + 7:30p
@ 100 NE 1 AVE. (Old Post Office)
Nikki Kidd Quartet • Funk & Reggae
Born and raised in Miami Beach, Nikki Kidd started singing at the age of four.  Her musical palate ranges from Jazz, Electronic Music, Reggae, Pop, Rock, Soul and R&B and that diversity is shown and very evident in Nikki's music. Nikki earned her Bachelors at the University of Miami in Studio Music and Jazz Voice studying with with world renown jazz artists such as Kevin Mahogany, Kurt Elling, and John Secada. Voted Miami New Times "Best Jazz Act" in 2018 and Legacy Magazines 40 Under 40 in 2018! Nikki Kidd has a way of commanding the stage which makes her performance one NOT to miss! ​