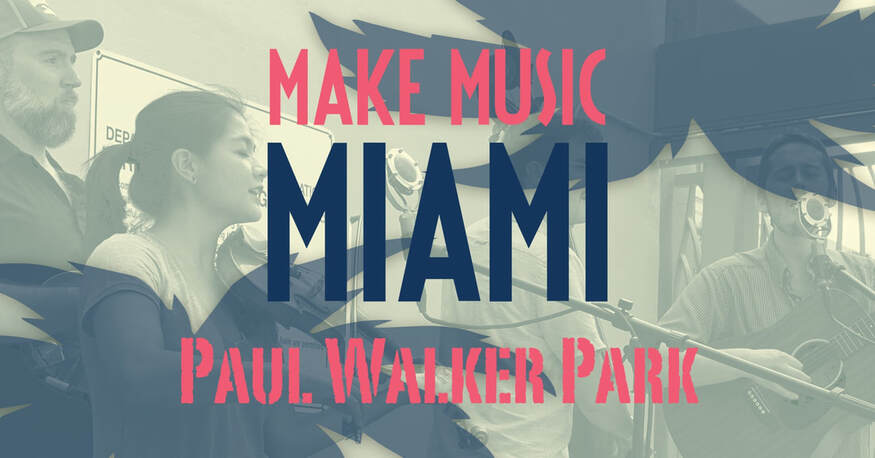 MAKE MUSIC MIAMI brings our city into the global music festival that began as FêTE DE LA MUSIQUE in Paris in 1982. Across the world, the Summer Solstice is celebrated with free performances of all kinds of music in public spaces. Downtown Miami again celebrates Make Music Miami with a full day of performances to celebrate the summer solstice and the global phenomenon of Make Music Day!

​Other Miami-Dade County locations: https://www.makemusicmiami.org
​
Make Music Miami is a collaboration between  Buskerfest Miami, The Rhythm Foundation, the French Embassy Cultural Services and many, many civic partners.

LINK TO Nearby Restaurants ​Cortadito’s focus is on performing the traditional Cuban music of the early 20th century. From Son Montuno, Guaracha, Boleros, Nengon, and Bolero Son, this dynamic ensemble brings the listener back to a time when Trio Matamoros, or Ignacio Piniero ruled the Cuban music world.  The era when popular music was Cuban Music and Son Montuno was influencing music throughout the globe. From time to time, Cortadito is backed by a variety of guest musicians, which gives the group a sound reminiscent of the Buena Vista Social Club. ​5 String Swing​ is a Swing Band led by Jazz violinist Steffen Zeichner with guitarist Greg Diamond. The group provides their own engaging takes on lively Swing and Gypsy Jazz repertoire reminiscent of the classic French Django Reinhardt/Stéphane Grappelli group of the 1930’s and 40’s, along with vintage Klezmer and  tunes from the Great American Songbook! Both Steffen and Greg have Doctoral degrees from the University of Miami's Frost School of Music and they actively perform throughout South Florida and nationally. ​LaVie was born in Miami, Florida, Charline. She was raised by her Haitian immigrant parents along with her brother and two sisters. LaVie discovered her love for music at a young age, to which she recalls, “My sister Sandrine and I use to watch Whitney Houston videos on VHS and sing into my mother’s hair brushes”.   In 2009, LaVie, released her first album titled “Life".  LaVie has toured major cities including New York City, Boston, D.C., Chicago, Detroit, and Pittsburgh opening for son of Bob Marley, KyMani Marley,  performing for thousands of enthusiastic fans and channeling her Caribbean heritage.  From her effervescent stage performances and Neo-Soul/dance fusion tracks, LaVie’s light-hearted, airy quality belies the life that she’s lived to date. ​The State Of is the product of Steph Taylor's edgy synth/piano playing and Nabedi Osorio's electronic-like live drumming. When coupled, they produce a sound larger than what’s expected out of two people. Playing with upbeat rhythms and melancholy tones, their music is a juxtaposition of dark and light with music you 'wanna' move to... ​Born and raised in Miami, Florida, Yoli Mayor has mastered a fusion of sounds as multicultural as her hometown. The 26-year-old singer first gained her voice through The Magic City's burgeoning underground music scene, quickly becoming a regular at community events, open mics, and intimate venues around town. Her trademark Latin-Pop sound earned the attention of award-winning publications like The Miami Herald, The Huffington Post, and Downtown Magazine(NYC), who dubbed her "The Cuban Adele." Partnering with award-winning local musicians and producers, she eventually came into her own, shedding the attachment to her roots and finding her unique, passion-fueled voice. ​Through the span of his career Miami bred singer/songwriter Robbie Elias has been a staple behind the scenes of the Latin pop world; writing songs, singing background vocals and touring with the likes of Ricky Martin, Marc Anthony, Daddy Yankee, Natti Natasha , Guaynaa, Alejandro Sanz and more. But a star like this is too bright to hide in the background ... with his knack for pop hooks and innate songwriting sensibility, Elias defies all stereotypes and blends his latin roots with soulful r&b melodies over a crisp sound that is all his own.